§0. The three paragraphs of Pausanias that I quote and translate here are relevant to my ongoing research on the hero cults of poets. In that research, I took note of a traditional idea that is typical of such hero cults. The idea is this: poets as cult heroes, can be imagined as speaking their own poetry from the dead—more specifically, from the tomb where a given hero is buried and worshipped as a cult hero (Nagy 2021.04.30 and elsewhere). In what follows, I focus on some relevant evidence adduced by Pausanias in the context of his visit to the tomb of the master poet Pindar. 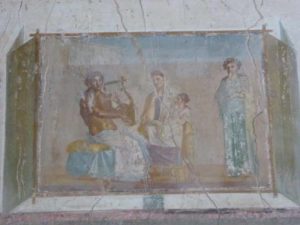 {9.23.2} Crossing over the right side of the race-course-for-foot-racing [stadion] [at Thebes], you come to a race-course-for-chariot-racing [dromos hippōn]—and right there is the tomb [mnēma] of Pindar. When Pindar was a young man he was once on his way to Thespiai in the hot season. At about noon he was overcome with fatigue and, as a result, he fell asleep. Then, while he lay there a little way off-road, sleeping, some bees flitted over to him and plastered his lips with their wax.

{9.23.3} Such was the beginning of Pindar’s making [poieîn] of [lyric-] songs [noun āisma (in the plural), derived from the verb āidein / aeidein ‘sing’]. When his reputation had already spread through all of Greece [Hellas], he was elevated to an even greater height of fame [doxa] by an order of the Pythian [priestess], who told the people of Delphi to allot to Pindar the equal portion [moira] of all the first-offerings that they offered to Apollo. It is also said that, when he reached old age, a vision [opsis] came to him in a dream. As he slept, Persephone stood over him and said that she was the only one of all the deities [theoi] whom Pindar had not praised-in-song [humneîn], but she went on to say that Pindar would make [poieîn] for her too a song [noun āisma, derived from the verb āidein / aeidein ‘sing’]—once he had come to her [in the realm of Hādēs].

§1. Relevant to my presentation is the commentary of Johanna Hanink (2018:248) on this text of Pausanias. Also relevant is the general perspective of Emmanuela Bakola on poets as cult heroes (2018:125, 137) .

§2. And the relevance extends further, since there are striking parallels to be found in lore about the tomb of Virgil, as we see from an incisive analysis by Irene Peirano Garrison (2018).

Bakola, E. 2018. “Earth, Nature, and the Cult of the Tomb: The Posthumous Reception of Aeschylus heros.” In Tombs of the ancient poets: Between literary reception and material culture (ed. N. Goldschmidt and B. Graziosi ) 12–145. Oxford.

Goldschmidt, N., and B. Graziosi, eds. 2018. Tombs of the ancient poets: Between literary reception and material culture. Oxford.

Nagy, G. 2008. “Convergences and Divergences between God and Hero in the Mnesiepes Inscription of Paros.” In Archilochus and his Age II, ed. D. Katsonopoulou, I. Petropoulos, S. Katsarou, 259–265. Athens. http://nrs.harvard.edu/urn-3:hlnc.essay:Nagy.Convergences_and_Divergences_between_God_and_Hero.2008.

Peirano Garrison, I. 2018. “Virgil’s Tomb in Scholarly and Popular Culture.” In Tombs of the ancient poets: Between literary reception and material culture (ed. N. Goldschmidt and B. Graziosi ) 265–280. Oxford.

2022.12.26 | By Gregory Nagy Essay 9. “The apobatic moment”: An interaction between an athletic event and a heroic experience…