§0. In this essay about online annotation, I write in the role of an occasional contributor of submissions to the editorial team of Classical Continuum—not in my original role as a founding editor of this online journal. The hope is that a wide variety of authors besides me will contribute their own submissions.

§1. I propose here to make a distinction between a simple “comment” on the one hand, as in one-time comments we find in learned commentaries written by researchers, and, on the other hand, a more complex system of “annotation” as part of an online conversation-in-progress about not only continuities but also discontinuities in ongoing research. A medium designed for enhancing such online “conversation” is the academic journal Classical Continuum, managed by an intergenerational editorial team as described by the convener of this team, Leonard Muellner, in the inaugural posting for Classical Continuum, 2021.10.01, https://continuum.fas.harvard.edu/inaugural-posting/. Symbolic of the hoped-for progress to be achieved by way of “conversation-in-progress,” as I just described it, is the image I have chosen as lead illustration for what I write here. This image, created through the artistry of Avanti Nambiar, reconfigures an ancient Greek vase-painting that depicts a performer of poetry—most likely Homeric poetry—in the act of ascending a set of steps leading up to an elevated platform where his performance will take place. In the artist’s reconfigured picturing here, however, the elevation of the platform keeps shifting, moving further upward. And the figure of the performer himself is blurred by his own corresponding movement further and further upward. What is suggested here, I think, is that the progress of conversation-in-progress can itself be symbolized as an attempted ascent to the sublime. Whether the attempt to ascend succeeds or fails, the attempt itself at making progress is what ultimately matters 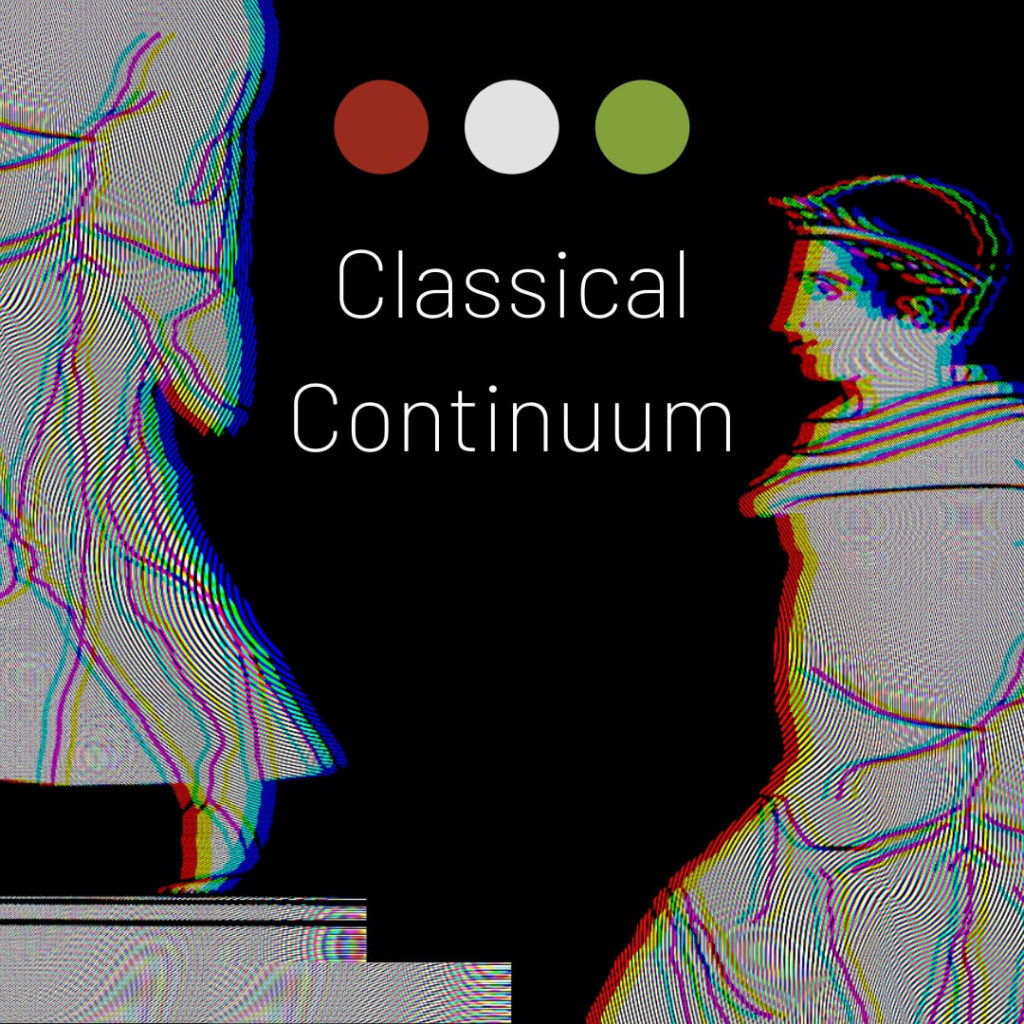 §2. There is a line-drawing, created by Jill Robbins, of the original image as depicted in the ancient vase-painting. I had chosen the drawing of that image as the lead illustration for an online project of mine, a book-in-progress, published in Classical Continuum and dated 2021.10.01, which is the “incept-date” for this online journal. The link is https://continuum.fas.harvard.edu/platos-rhapsody-and-homers-music-the-poetics-of-the-panathenaic-festival-in-classical-athens/.

§3. This project, signaled by the link I just provided, is a test-case for experimenting with online annotation. It all started with a book of mine that first appeared in 2002, originally published in printed form by the Center for Hellenic Studies. That printed version was later replaced by a corrected online version, bearing the same date: http://nrs.harvard.edu/urn-3:hul.ebook:CHS_Nagy.Platos_Rhapsody_and_Homers_Music.2002. And that online version was later replaced by a new online version, which became in effect a second edition, originally cited as Nagy 2020 in bibliographies: http://nrs.harvard.edu/urn-3:hul.ebook:CHS_Nagy.Platos_Rhapsody_and_Homers_Music.2020. That second edition, posted 2020.07.03 in Classical Inquiries, is now superseded by a third online edition, launched 2021.10.01, which has been relocated to the platform of Classical Continuum. I repeat here the link for this third edition: https://continuum.fas.harvard.edu/platos-rhapsody-and-homers-music-the-poetics-of-the-panathenaic-festival-in-classical-athens/.

§4. As I noted in my Introduction to this third edition of Plato’s Rhapsody, its relocation from Classical Inquiries to Classical Continuum makes it easier to add an important new feature to the overall project. This feature, which I have already been describing here as “online annotation,” was not yet implemented at the time when the second edition went online, but it can now become a reality in the context of the third edition and thereafter.

§5. This new feature of online annotation, as I also noted in the same Introduction, makes it possible to invite other researchers to add annotations to my online text—annotations that can be viewed as an experimental form of open peer review. That is to say, the text of my third edition of Plato’s Rhapsody can be annotated by contributors who are invited by the editorial team of Classical Continuum to make comments on and criticisms of my argumentation. The procedures of annotating, in which I too hope to participate by occasionally making my own additional annotations to my text, may be periodically adjusted or readjusted by the editorial team of Classical Continuum.

§6. And here I come to a further consideration, also noted in my Introduction to the third edition. A few of the new entries in the bibliography of this third edition involve references to relatively recent publications by linguists offering further insights into the etymology of the word humnos—a word that proves to be important for my overall argumentation. On the basis of these insights, I have rewritten what I originally wrote in Chapter 3 §2 and note 3. Such revisions of content in this third edition will continue, I predict, but in a different form. I have in mind here the genre, as I already called it, of online annotation, which I described earlier as an experiment in open peer review. For the purpose of future revisions, I hope to engage with comments, corrections, and criticisms that readers send as submissions to the editorial team of Classical Continuum. Such mutual engagement may take the form of annotations placed in the margins of my text as it appears in the online edition. I should add, however, that the placement of annotations could be configured differently. At §10 further below, I mention an example of one such different configuration.

§7. In the expected process of my writing further annotations of my own, I will have to keep updating references to other works—including mine—and to points of view that mesh or do not mesh with what is presented in the current third edition of Plato’s Rhapsody.

§8. An aspect of my anticipated rewritings—one that I expect will be particularly challenging for me—is to re-do some cross-references I made, in an earlier work of mine (Nagy 2015), to three even earlier works, originally all stand-alone articles, which were later combined to form the three interconnected chapters of Plato’s Rhapsody (in the Bibliography, these three articles, under my name, are dated 1999, 2000, and 2001).

§9. Such kinds of cross-referencing will be correlated with a planned cumulative online bibliography that can keep expanding as it tracks ongoing annotations.

§10. In closing, I add a general observation about the “genre” of online annotating. When I described this “genre” above at §6, I referred to one specific way of formatting such annotation, that is, in the form of marginalia. But I already indicated there that the form of annotations can vary. Here I give only one obvious example: annotations for brief works such as essays—or even for a book-length work—do not need to be placed in the margin of the given work. Instead, annotations can take the form of stand-alone essays written by individual authors or by groups of authors.

Bibliography for this essay

Nagy, G. 1996. Poetry as Performance: Homer and Beyond. Cambridge. http://nrs.harvard.edu/urn-3:hul.ebook:CHS_Nagy.Poetry_as_Performance.1996.

Poetics of Repetition in Homer, second edition, ready for annotation

Introduction to the series “Annotations about archaic Greek lyric” For English-speakers in the world of higher education, as of this…

A Draft of the Forthcoming Book, Aeolian Origins, and Other Mycenaean Matters

What follows is a draft (dated 2021.12.31) of 23 chapters taken from the forthcoming book, Aeolian Origins, and Other Mycenaean Matters, by…